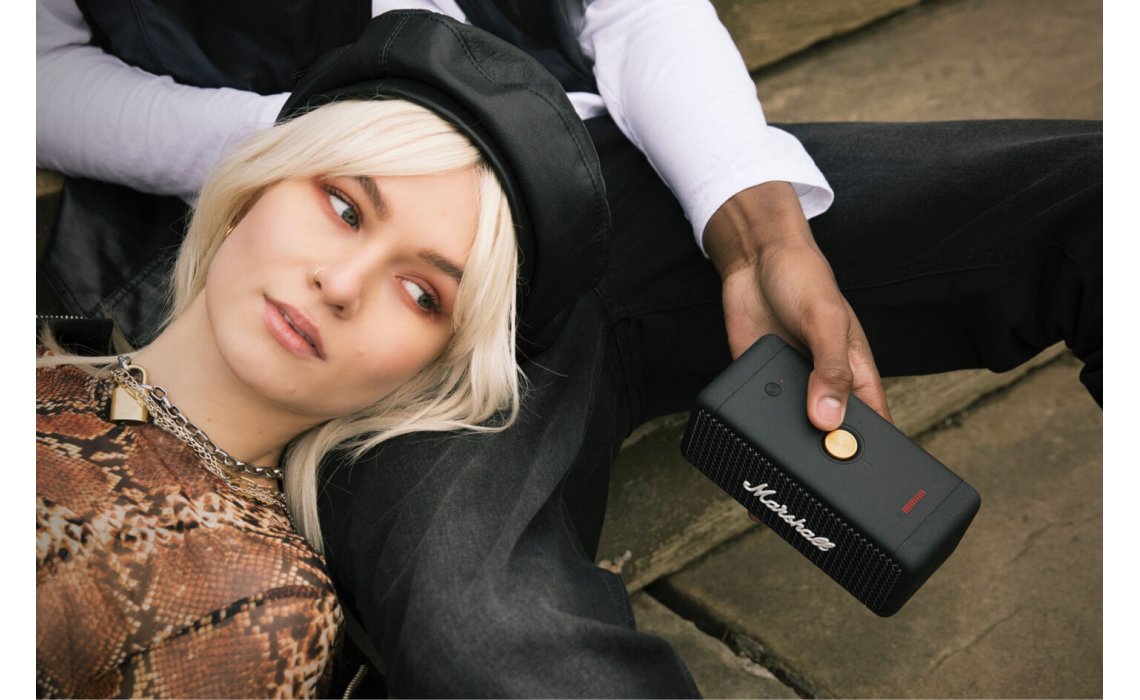 The target market for a speaker like this want a combination of portability, acoustic power and long battery life. The Emberton ticks those boxes with confidence.

The Emberton is much like other Marshall speakers, but smaller. This is by far the smallest model we’ve seen from the firm and could just about be described as palm-sized. It’s also lightweight at just 700g.

It’s not the smallest speaker we’ve tested at Tech Advisor towers but it’s very compact and will easily fit into bags with ease. To say it’s pocketable is a stretch unless you’re still rocking some combat trousers and that wouldn’t be comfortable anyway.

Forgoing the usual leather, the Emberton has a silicone rubber coating with the same texture. It makes it more durable and grippy since it’s designed to take out and about. An IPX7 rating means you’re protected from splashes of water as well as complete submersion, although Marshall oddly does not claim the Emberton as waterproof in the small print.

There’s a black metal wire gauze at the back and silver at the front, adorned with the iconic logo. It’s a smart looking device, but the black and brass option looks super classy with black all over and the logo in, well, brass.

Apart from a USB-C port on the side, all the action is on the top with a Bluetooth pairing button and battery gauge straddling a striking brass button. There’s no space here for the amp-style dials found on the larger speakers.

This is more than just a power button, though. It’s actually a multi-direction control knob similar to the one found on Marshall headphones like the Monitor II ANC. You can rock it up and down to adjust volume, click it to play pause or flick it left or right to skip tracks.

Marshall says that the Emberton ‘packs a punch’ and that’s certainly my experience of using the speaker.

Inside are two dynamic full-range drivers that are 2in along with a pair of passive bass radiators. ‘True Stereophonic Sound’ is Marshall’s term for explaining that the speaker offers 360-degree sound along with custom tuning.

Technically this is a stereo speaker but being so small there’s not really a stereo field to speak of. It does a great job of filling a space with rich sound, though and that’s its main job. It’s not quite 360 like some speakers as it doesn’t sound great if you’re facing it side-on.

It’s slightly mind-boggling how a speaker so small can provide such a big sound. It legitimately sounds better than many bigger speakers and soundbars I’ve tested over the years.

Bass is warm and much more pronounced than you expect looking at the speaker. The mid-range is rich and clear, too, and there’s enough top-end to keep things knitted together. Tuning is nicely balanced so the Emberton sounds good regardless of what you throw at it.

You do lose a bit of quality at higher volumes with a more ragged sound, but there’s not much distortion and I haven’t found the need to pump the Emberton to higher volumes anyway.

There are a few small downsides to mention as you can’t use the Emberton with the Marshall app to do things like tweak the EQ. You also can’t create a stereo pair if you have two of them.

This isn’t a huge deal since the sound profile is going to appeal to most users and I didn’t find myself wanting to change it, but worth pointing out as adjusting bass and treble is normal on other Marshall speakers like the Uxbridge - which is also a smart speaker.

Another thing you might expect from an amp maker is some kind of input, but unlike other Marshall speakers, the Emberton doesn’t have a 3.5mm aux input so you’re limited to Bluetooth connectivity.

Despite being so pint-sized, the Emberton is able to offer over 20 hours of battery life. That’s very impressive and I’ve found the speaker to just keep going and going, only having to charge it a couple of times over the last month or so.

It charges over USB-C and a 20-minute charge can give you five hours of playback which is handy if you’re heading out but realise the Emberton is flat.

The Marshall Emberton is one of the best Bluetooth speakers I’ve ever tested, doing exactly what it’s designed to do.

It looks great, is highly portable with a rugged design and offers a surprisingly big and rich sound for such a small speaker. Throw in really long battery life and a pretty good price point and it’s a winning combination.

There are some small downsides but they don’t detract much. It’s mainly an aux input that would be handy and the ability to stereo pair two Embertons would also be nice. 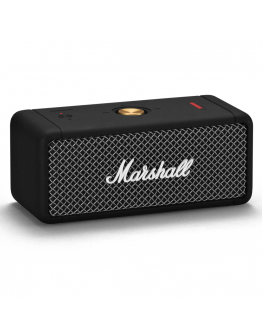 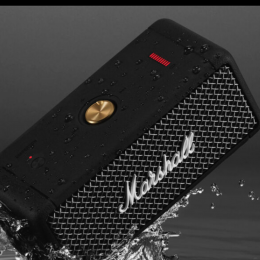